Blackrock Neurotech: The Cutting Edge of HealthTech – Translated for Everyone

Life-changing neurotech was being sidelined, and even dismissed as outdated. A cross-functional PR approach reshaped the story to capture attention from a wide-range of reporters -- and readers. 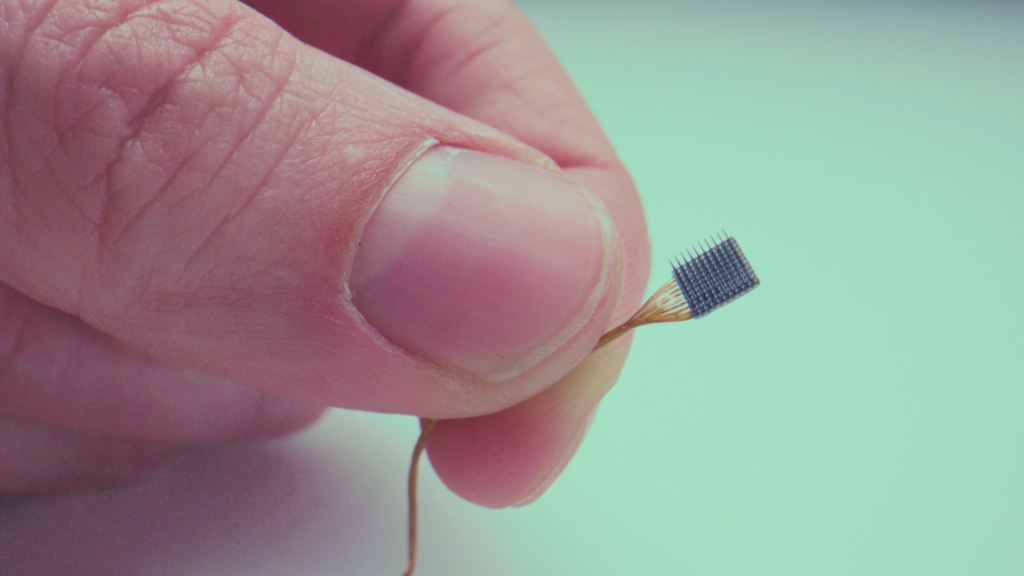 Click the video to watch a Bloomberg segment on our client, Blackrock Neurotech, placed by Lightspeed PR/M.

Ironically, the most awe-inspiring work can sometimes be the hardest to promote.

Ironically, the most awe-inspiring work can sometimes be the hardest to promote. As a leader in brain-computer interface technology (BCI), Blackrock Neurotech is at the forefront of health technology. But developing a story around neuroscience is a challenge. To reach audiences outside the scientific community, complex and cutting edge innovations have to be shared with a careful and strategic approach. It requires translating the jargon of complex technology in a way that both educates and informs.

Blackrock’s flagship product is the gold standard of BCIs – miniaturized systems that are implanted in a patient’s brain. FDA-cleared and proven effective, they have the potential to treat many disorders, including paralysis, stroke, epilepsy, Parkinson’s, hearing loss, blindness, depression and anxiety. In fact, Blackrock’s announcements read more like science-fiction than reality, such as a recent one heralding quadriplegic and tetraplegic patients gaining the ability to think-to-text.

Needless to say, this type of life-changing technology deserves far-reaching attention. Yet, news of the company’s work had been limited only to scientific periodicals. Worse still, that coverage primarily featured the researchers and patients involved, with few mentions of Blackrock.

A review of past announcements made by Blackrock revealed that the company rarely contextualized its remarkable achievements compared to the competition. At the same time, Elon Musk was gaining increased attention for his competing BCI company, Neuralink, despite its having less experience, and success, than Blackrock.

With our team of cross-discipline experts, Lightspeed PR/M knew we could tell Blackrock’s remarkable story in a new way. Our discussions with the client confirmed they had the right science, evidence and third-party approvals to stake their claim as a leader in this emerging industry. With that in place, we deployed our health tech, general tech and media experts, who devised a strategy that would move Blackrock from the footnotes to the headlines:

A review of previous media relations efforts made one issue clear: the press couldn’t get excited about technology they didn’t understand. That meant creating language for Blackrock’s extraordinary work that made it accessible across all audiences. Tapping our team of “tech translators” we reframed the story to highlight the impact of the work first. Through this shift, each announcement could get reporters excited about the news without heavy use of medical jargon. Working with CEO Marcus Gerhardt and his team, our resulting messaging accomplished our central goals of informing all readers — in both science and non-science audiences — while still maintaining the integrity of the research and respecting Blackrock’s partners and patients. This included reframing the social media content, focusing on telling patient stories that were captivating and shareable.

Be Bold and Proud of Our Legacy

Our next step extended the focus of phase one, but with a specific eye on the competition. Neuralink’s entry into the BCI space, along with its famous founder, had resulted in news coverage with far-fetched speculation on what this technology could do. It also led some reporters to regard Blackrock as the less innovative company – the one running behind a competitor that was pushing boundaries. Our messaging had to change that. As the oldest company in BCI technology, Blackrock has been part of human research trials for more than a decade, and with demonstrated success: of the 36 participants with implantable BCIs, 32 are implanted with Blackrock technology. Lightspeed’s strategy was to emphasize this legacy of experience and accomplishment. Working with our client’s leadership, we pivoted away from their previously conservative talking points to take a more balanced approach. Our new stance would be bold – even going so far as to call out the competition – but importantly, it would always be grounded in facts. From Reddit to Twitter, we also joined social media conversations calling out the competition and showcased Blackrock’s success.

With our messaging, narrative and focus in place, it was time to take Blackrock’s story to wider audiences. We started by deploying our healthtech team to engage science and health reporters on the full story of Blackrock. Our reframed storyline succeeded in gaining coverage from prominent health, science, pharmaceutical and neurotech publications.

With the process proved, we took it further. Recognizing the reach of Blackrock’s innovations, our next step was to engage reporters outside of health and science. That included a business angle that earned coverage in major business media like CNBC, Bloomberg, Fortune, Forbes and MSN.

As interest built, our team kept close watch on competitor news to find opportunities to insert Blackrock into that conversation. We found initial success with The New York Observer, working with a reporter who had covered Neuralink. She was so impressed with Blackrock’s leaders that her resulting article was headlined: Elon Musk’s Neuralink Brain Implant Technology Is Outdated…says the CEO of Blackrock Neurotech. Throughout the article, Blackrock’s co-founders showed our new bold-but-balanced approach. They praised Neuralink, while setting the record straight about the technology. CEO Gerhardt even slid in a little humor, stating, “Elon got us a lot of publicity and awareness. That’s great for this space… He just has to come to terms with the fact that he’s not number one. I’m sure he’ll manage it. He’s already got two great companies out there.”

Another notable article was from Washington Post reporter Steven Zeitchik, that also demonstrated the balanced position we set out to achieve. Blackrock’s CEO was quoted calling out Musk for over-hype: “If you send a sporadic message, on the spur of the moment, to patients and get their hopes up, it’s irresponsible no matter how you try to turn it.”

We also expanded our audience on social media. Historically, passionate investors made up the majority of the audience. We began engaging with media, researchers, the disability community and medical community to amplify Blackrock’s content.

Then we took our biggest step: with interest sparked and the technology understood, we finally had the platform to win attention from the general public. Working with the client, Lightspeed uncovered the human interest side of Blackrock’s story, sharing news of how its BCI patients were using the technology. Whether it was to create artwork, play video games, drive car simulators or control robotic limbs, these real-life examples illustrated the many ways Blackrock was improving lives. As a result, our team captivated interest from major market news outlets such as NPR.

A strategy with measurable success

Before long, Blackrock was no longer a brief mention in articles about BCIs – it was the headline. With examples like: Mind-reading implant may soon go on sale, in December 2021’s New Scientist, boasting a readership of nearly 5.5 million; and The BCI System MoveAgain Wins FDA Breakthrough Device Status, in November 2021’s Psychology Today with a readership of over 20 million.

In business news, Forbes featured an interview with Gerhardt as both a podcast and article, reaching a total audience of over 150 million.

We even revisited the Observer , winning a follow-up article that explained the process of getting a BCI device through FDA approvals.

In total, Blackrock has enjoyed coverage in more than 115 articles, podcasts and news programs, with a total audience of over 4.5 billion – all less than one year since Lightspeed began working with the company.

On Twitter, profile visits soared. Typically, we expect 1.5%-2.4% of impressions to turn into profile visits – we achieved 15-25% which is unheard of. Benchmark Twitter growth rate is .71%, And our engagement rate climbed to 5.2% – engagement rates between 0.02% and 0.09% are considered to be good.

On LinkedIn – our other key channel – we doubled our following in just 6 months. We increased website traffic from LinkedIn by 1,037% in that same time period and increased engagement by 4,761%.

The Lightspeed team continues to manage a full pipeline of interview requests from reporters around the world. Further, the media visibility secured by Lightspeed has been applauded by prospects who want to work with Blackrock and be a part of its media machine.

What the press say...

Click the publications below to see more of what we have done for Blackrock Neurotech.

New brain-computer interface technology is giving quadriplegic and tetraplegic patients the ability to control computers, thought type at 90 characters a minute, and move robotic arms to feed themselves, or high-five family members. Built by Blackrock Neurotech and including technology licensed from Stanford University, the technology is scheduled to come to market this year, and will enable up to ten times faster communication than existing products. And, it can even allow brain-computer interface pioneers to feel the warmth of their loved one’s hands in a handshake.